The 9th of November JEF Leuven’s first activity took place! We celebrated the 20th anniversary of the fall of the Berlin Wall, together with several of our JEF departments all over Europe! Our goal was not just to reminisce about Eastern Europe’s new found freedom, but also to point out that despite our progress, there are still many visa-restrictions that need to be taken care of. We set up our cardboard wall in the Leuven city park. It took a while to convince bystanders to take a shot at breaking down the wall, but soon people were joining us spontaneously. They enthusiastically destroyed the wall using a football, a boxing glove and even a baseball bat. Exactly what we wanted! JEF Leuven has torn down the wall successfully! And we have the pictures to prove it!

JEF Gent celebrated, in cooperation with the Vlaamse Geschiedkundige Kring and Minos, the 20th birthday of one of the biggest events in European history: the Fall of the Berlin Wall. The popular newspaper Het Nieuwsblad made some promotion for this event. 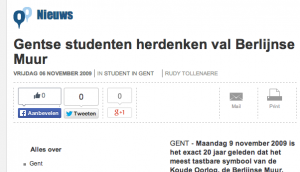