For the moment I’m sitting in the Sanatorium 23 bar with some locals. It wasn’t easy today, but now I’m chillin so let me tell you more about my day.

I got up at 8h30 to leave at 9 am for our first informational seminar session in Berlin, the JEF World café session. It’s a lot like the Speeddating Europe activity in Ghent, but with bigger groups, longer discussions and a bit more anarchy. We were free to choose at which table we wanted to join until all chairs are taken. What I really missed was of course the little ‘change seats’ tune, so did the moderator I guess. After four group discussions and two hours later we were invited to a soup buffet for lunch, paid for by a German insurance company, thanks! 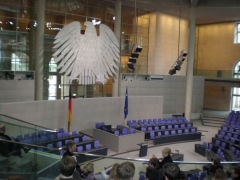 We kicked off with a fish bowl discussion, a novel discussion concept that let’s room for participants to join a small permanent panel up front. Everybody was invited to make a couple of statements if they felt like it. Since it was pretty late yesterday and the speakers weren’t that interesting, participants had a bit of trouble filling in the empty seats of the panel. But hey, it was international evening yesterday, living on a seminar can be hard.

We finished our seminar responsibilities with a visit to the dome of the Reichstag. A disorienting structure of steel and glass, that moves, ventilates, shines,… well very important for Germans and very pretty to look at. The tour on the dome was even funnier, real German stuff here. They gave us an audio guide that told you when to stop while climbing the dome and at which buildings to look. I lost the track quite early. International evening hangover maybe? Or just me wondering over the large skyline of Berlin. Breathtaking anyway. 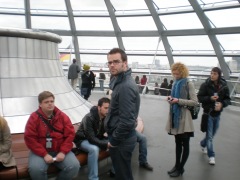 So now I’m in the company of some lovely locals. Their’s Martin, Merete, Manja (the pirate girl) and Uwe from the seminar, joined by Andreas, Sascha, Mattias and Maja. They’re a nice bunch of hardcore hamburger fans. They took me to a small place called the “frituurhause” and let me get a taste of my first real Berlin Hamburger. I can assure you, definitely better then my German Bradwurst yesterday, and very enjoyable. The frituurhause looks actually like a real frituur, but don’t come looking here for a bickyburger. Only ‘real’ meat my German friends assure me, and no deepfrying. Although I miss my bicky I left satisfied and happy, guess they made a new fan. This brings me to where I’m right now the Sanatorium 23 bar, a lounge bar, with stylish seats/beds, arty pictures on the wall, ambient beats and a fine gin tonic. Prizes are about the same as in Ghent so no panic here. Time for me to go again though, cause my Berliner friends are starting to think I’m a real computerfreak.

Maybe a little, but not that much. Let’s enjoy our drinks, but get to bed early tonight, because tomorrow the workshops start (Blogging or Streetart for me) and off course their will be the official party. Good night and see you soon again.