Because JEF Leuven wanted to make an early point against the dictatorship in Belarus, we organized our protest action on the 17th of March in the streets of Leuven city. The preparations started back at my place, a remote location close to the docks and across from an abbey. Despite the fact that the building used to be a nunnery, we sat down with a few bottles of beer and a very good mood in what the residents of my place call the Mirror Room. There we started manufacturing gags by ripping old clothes (a very interesting and fun process) and devising slogans for our banners. The best one, in my opinion, was : “Belarus is suppressing its people since…” followed by a picture of the notorious Lukashenko, in which he only lacks a moustache to resemble Hitler.

Around 11 Pm we were ready to hit the streets. We took our banners and the flag of Europe and headed out into the night. The first more populated place we came across was the Vismarkt, where our enthusiasm was immediately met in kind. Some students listened to our explanation and reacted vehemently against the last dictatorship in Europe, of which they had not been aware five minutes before. One of them even put on a Lukashenko mask and asked a passer-by if he knew who he represented. To which the answer came promptly: Hitler (I told you so!). Our film crew interviewed another one of the students as he fervently declared that there should be no dictatorship in Europe. We were so happy with this passionate start to our night that we didn’t mind the fact that he was from the Dominican Republic.

We then started towards our first victim: the small statue in the Brusselsestraat at the Dyle. We gagged it and took a stand with the whole group behind it, while our filming crew documented the event. Because our next stop was the Damiaanplein, we didn’t encounter a lot of people on the way there, but that didn’t deminish our enthousiasm or ability of some of u

s to invent very original catch phrases. Unable to locate the statue of Father Damiaan that we were looking for, we decided to continue our pilgrimage to the centre of Leuven. 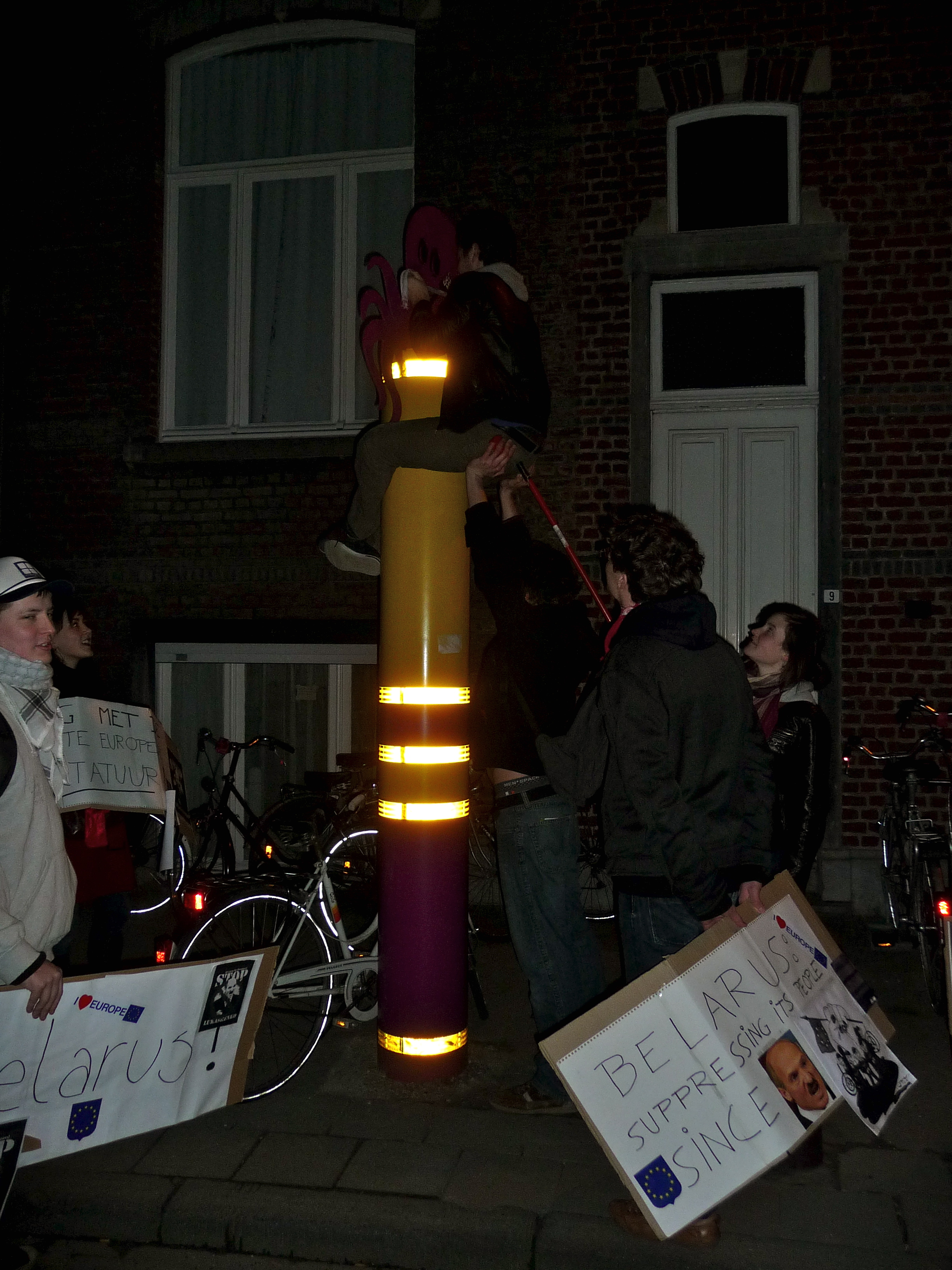 We passed through the Hogescholenplein and the Muntstraat, while we continued yelling and our film crew was running up and down to gather footage. Because we were in a pretty crowded area, and we were actually committing a felony on which there is a fine, we gagged “Fiere Margriet” quite fast and proceeded in a rapid pace towards the statue of Pieter de Sommer. On the way back to the Tiensestraat we decided to gag a colourful octopus perched on a stick. You find those pretty much everywhere in Leuven next to schools. Thanks to Sam’s climbing talents, Peter’s support and the broomstick, the operation was successful.

The next stop was the Hooverplein, with two different sets of statues. The first ones were very apt to be gagged, and did not need our living assistance to look sad and down, as you can see in the picture. The men in the balloon, though, were harder to reach, and though we gave up for the time being to vandalize that statue, the last word hadn’t been said yet.

Not discouraged at all, we proceeded to the Erasmus Garden, which was abandoned at that time of night. This gave us the opportunity to take many pictures of the famous horse of Letteren, a horrible statue which I very much enjoyed defiling. I think the photos of that event were priceless.

After gagging one last victim, we decided to call it a night and went for a drink. Some of us started drifting towards home, but others didn’t want to give up just yet. With a little help and cheering, Sam managed to kiss the man in the balloon. In my opinion, this was a very successful end to our action.

I don’t think we’ve met anyone who knew previously what we were protesting against, but hopefully some people will remember now: Europe doesn’t tolerate dictatorships, the people of Belarus need a voice, and Lukanshenko looks like Hitler.