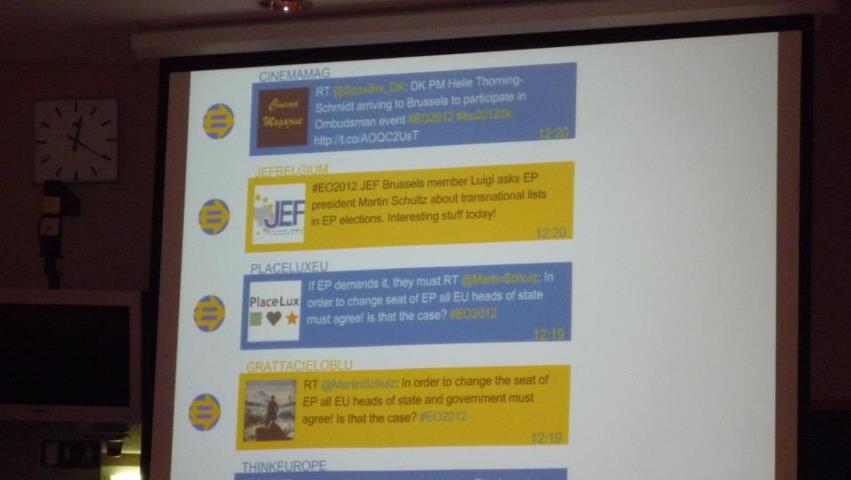 Today’s tumultuous times are indisputably an enormous challenge for everyone involved in politics. This is true for every policy level, but is even more so for the European Union. Even before the financial crisis (firstly) and the budget crisis (secondly) had hit home, the E.U. had a difficult time in profiling itself as a force for good to – and gaining the trust of – its half a billion constituents. Since the crisis’s the E.U. has had more media coverage, the negative connotation surrounding that attention, however, didn’t boost the public image. To the contrary. The trust and confidence in the European Union and its institutions has never been this low.

It is for this reason that the European Ombudsman organised a seminar intended on gaining at least a bit of trust back from the Europeans. JEF Belgium was present to take note and ask questions.

The European Ombudsman, Nikiforos Diamandouros, gave the introductory remarks and sketched the context of why the European Union has never really been great in generating trust with its constituency. According to the Ombudsman, the word “citizens” only came into the minds of the European policymakers since the treaty of Maastricht. So, the institutions are still learning how to deal with civil society and citizens of the Union.

The opening statement of Mr. Barroso was something the two other speakers would fall back on. “The  lack of trust is not a problem in the European institutions alone, no, there is a lack of trust in politics in general”. Both, Ms. Thorning-Schmidt and Mr. Schulz would repeat that it is indeed a more general problem in each member state and, indeed, with politics/politicians in general. There were some differences in how this trust would be gained.

The four solutions were either rational – Thorning-Schmidt, Diamandouros – or emotionally – Barroso, Schulz – founded. The presidents of both the Commission and the Parliament presented a fierce argument. Both speaking out to the Europeans to get more involved (stressing on leadership, ownership and ideas) with European politics and at the same time telling us that the European institutions could and should indeed be a lot more transparent. This analysis was in sharp contrast with the one Thorning-Schmidt made. According to the Danish PM, it is tangible results that would regain the trust that was lost. But for us, young activists, the clearest answer to the “How?” question was put forward by the Ombudsman himself. The institutions need the civil-society. They need to be in contact with the citizens. Participation and dialogue – with the European Citizens Initiative as a crucial instrument – are vital.

We, as young federalists, found one thing missing though. What about institutional answers, like a (more) federalist union? It is our belief that creating such a federalist union would enhance the trust through the creation of, for example, transnational lists or the clear post of one European president. Together with clearly outlined European institutions this would create a stronger European civil society and therefore gain the trust of the citizens. When asked the question by “that young man from the federalist movement” (as Barroso addressed JEF Belgium president Peter Oomsels), he swiped the thought of institutional reform from the table. His argument being that everything is already in place, but needs to be executed much better. Thorning-Schmidt also denied the necessity of any institutional reform and Schulz, when presented with a question from JEF Brussels member Luigi Sementelli, stated that transnational lists and the creating of real European political parties are a step further in the integration process for which many member states simply are not ready.

However, we are strengthened with the thought that all four speakers were actively engaging with the whole Union via the tweet wall, and every single one of them stressed the importance of an European policy aimed at the people in the first instance, trying to create a more engaged civil society that is not shy to put its ideas, concerns and wishes up to the European institutions. And that’s exactly what we as Young European Federalists are doing – creating dialogue with a vision.

To conclude: this was an event that certainly should happen annually!