About a year ago the JEF Cross border network was launched.  The JEF sections of Belgium, Maastricht, Leiden, Nordrhein-Westfalen, Luxemburg and Lille all found common ground and started to plan the seminar on the Euro crisis and European solidarity.

Even upon arriving at the hostel in Maastricht, the fatigue was already visible on the faces of the organization team. If the work put in would match the outcome, we were going to have a great seminar. After the registration, the seminar was immediately under way. Of course the obligatory ice breaking games couldn’t be left out before we made our way to the ‘welcome dinner’.  The welcome speech was delivered by the mayor of Maastricht, Onno Hoes.

The first full day of the seminar started off with some speeches. The opening speech by JEF Europe president Pauline Gessant and the keynote speech by Richard Corbett, advisor to Herman Van Rompuy. Stressing the relevance of the theme tackled at the seminar, Pauline couldn’t be more clear, if there ever was a need for European solidarity, if European solidarity ever was an important topic in the public opinion, it is right now.  During his keynote speech, Mr Corbett picked up on the solidarity theme and spoke more in depth about the several solidarity mechanisms present within the current functioning of the E.U. institutions, and how those mechanisms (dis)function in the current economic crisis. As JEFfers we shouldn’t be blinded by the present, no, a JEF point of view is one that looks ahead and finds  (a) federalist solution(s).

Then it was up to us. A small internal debate about what we think is the biggest threat of the crisis, how the crisis effects our personal lives and how do we see the E.U. in the future? It certainly was interesting to see how different people around Europe perceive the crisis. For some participants, there was no effect at all, while others testified some stories about wages cut in half and living with the daily possibility of losing one’s job. If we went over the threats of the crisis, clearly, a lot of people were concerned about their future and feared that the next generation probably would struggle to profit from things we find logically. Thirdly, the question on the future of Europe, seemed to divide the room. One comment was particularly pessimistic on the lasting effect of the crisis, and predicted cycles of institutional problems in the future. However, it is encouraging that most of the participants foresee a Europe which makes integrated steps towards a more federal Europe.  Then, shockingly, some well-known MEP’s appeared to have made the trip from Brussels to Maastricht! The characteristics were portrayed admirably, and a couple of jabs back and forth made the mock-debate all the better. Definitely a nice way to change the mood and create some space for fun.  Still, at the end of the debate our keynote speaker, Richard Corbett, couldn’t help but intervene. Some facts needed to be set straight and some arguments made by the eurosceptics needed to be refuted – “If a single currency can’t work, what about the pound in Britain?” Case closed.

As the lunch hour approached, we went ahead to the sandwich bar for a quick snack. The afternoon held more in depth debating about different forms of (European) solidarity and aspects of the euro crisis. To get a broad view of all the components, there was a speed dating with different experts in different fields, this setting gave us, participants, the chance to ask pertinent questions relating to the different topics. Afterwards we broke up into several workshops and tried to actually get some answers to the questions and issues we’ve been faced with all day. Even under the tutelage of an expert in the field, many questions proved too difficult to answer. A JEFfer can only do so much..

As the debates of that day winded down, the evening activities were the next thing. Knowing the JEF spirit, it was already apparent that the ‘evening’ activities, would also prove to be the ‘early-morning’ activities. After a nice walk through Maastricht – under the disguise of a picture scavenger hunt – we gathered at the market square to start the pub crawl. It must be said that JEF Maastricht upheld the strict standards for JEF evening activities, so well done!

I should note that it doesn’t matter if you’re used to it or not… Waking up after 3 – 4 hours of sleep hurts. A lot. To counter the sleepy state of mind most of the participants seemed to be in, an energizer was in order…after all, there was some work left to do. The final day is traditionally the ‘output’-day and today wasn’t different. To achieve the first goal, coming up with a campaign idea which could serve as a follow up activity, a Youth in Action information session was in order. This session had the purpose of getting us up to date about was expected of us. Even in the sleep deprived state of mind we found ourselves in, some pretty good ideas were formulated. The main output sessions of the afternoon – and indeed the closing session of the seminar – where either conceptualising the campaign idea or drafting a resolution to be presented at the next Federal Committee of JEF Europe in November.

As I was part of the group that tried to draft up a resolution, I can’t say much about the process of the group that worked on the details of the follow-up campaign. It seems, however that creating a campaign with a very limited budget is not an easy trick to pull off. So, the group members, headed back to the drawing board and formulated a new idea. The costs are almost zero and the proposed campaign really highlights what the Cross border Network stands for – European cooperation and solidarity. So stay tuned!

Drafting a resolution with nine people is a serious task. Actually, almost an impossible one. So it shouldn’t be  surprising that we weren’t able to present a finished product. Nevertheless, the basics of the text has been agreed upon so with the help of a few willing souls, we should be able to present a resolution at the next FC (in Copenhagen).

That was it. No more debates, workshops or energizers. Time to go home! Not after the JEF song (and the fabulous news that the seminar favourite, Gilbert, became world champion cycling). The fact that the JEF song was preceded by an explanation of what was about to happen, gives you all the information you need…there were a lot of new faces in Maastricht, and all happy to have participated. Furthermore, some plans were made to organise some cross-border activities on a smaller scale between local sections… The Cross border network only just made itself visible through this seminar, but it clearly already made  impact on the future of the JEF organisation. There’s no way to tell what will happen next year – there’s going to be a next year, right? 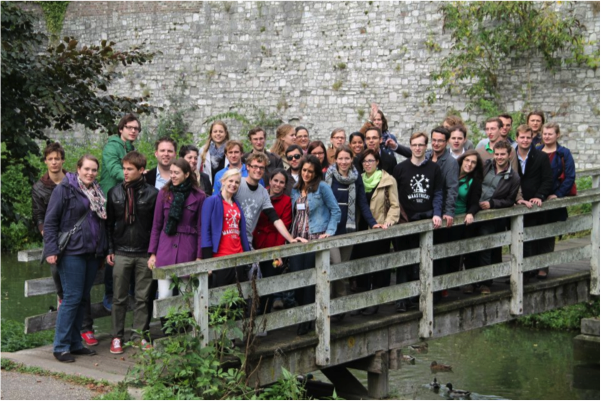 Thanks to the organisation team;

all the speakers/experts who shared their views and insights;

and all of the participants, you all made the seminar the wonderful event it was.

The first cross-border seminar was organised by the JEF sections of Nordrhein-Westfalen, Maastricht, Leiden, Belgium, Luxemburg and Lille and got the financial support of the Youth in Action Programme and the Euregio Meuse-Rhein.