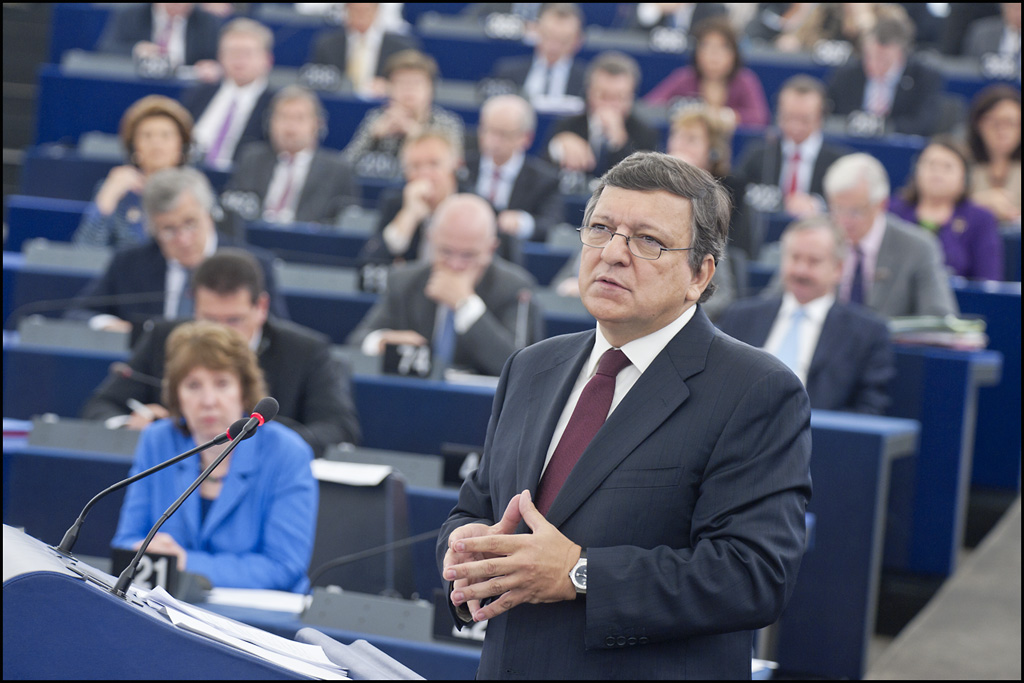 Wednesday 12th of September, world’s media  turned to Europe, as it was announced as Super Wednesday for the European Union. Despite fears  that it might run poorly somewhere, Europe came unscathed out of this challenging day. The German Constitutional Court judges approved the European Stability Mechanism; pro-European parties won the elections in the Netherlands and Barroso called in his State of the Union publicly for a Federation of Nation States, which created a lot of buzz, and marked a shift on the highest level towards the federalist path. We would like to highlight some of the more interesting essential elements in his speech.

Let’s not be afraid of the word…federalism.

In the State of the Union, which was recently instituted by the Lisbon Treaty, the President of the European Commission traditionally addresses the Members of the European Parliament in the plenary in Strassbourg. Shots of the parliament chamber showed a fair number of empty seats at the State of the Union address , but it did not influence the dedication with which Barroso delivered his state of the Union and the debate after that (without his glasses!).  Barroso strongly pledged for more democracy, trust, responsibility, solidarity in Europe and between member states. Unsurprisingly, the  eurocrisis and how to overcome it were key elements in his speech.

Barroso particularly criticized the behavior of Member States in the European Council saying that it is “not acceptable to treat these European meetings as if they were boxing events”. He argues that EU member-state governments have been obsessed too much with “point-scoring”. “ Instead, he called for the strong Member States to commit to helping the weaker ones and for the weaker ones to make the necessary reforms. “Because in order to survive, the Union should evolve and agree on “a decisive deal for Europe” that would establish a “contract of confidence between member countries, EU institutions, social partners and the Union’s citizens.”

He stressed the need of the EU “leaving its comfort zone” in order to create “a deep and genuine economic union, based on a political union”. He wrapped up his analysis of the problem with a strong conclusion:

“Let’s not be afraid of the word: we will need to move towards a Federation of nation states . This is what we need. This is our political horizon.”

Barroso acknowledged that such process will require treaty changes, and thus takes time. He promised to outline his vision for this future federation before the next elections for the European Parliament in 2014. “Where we cannot move forward under the existing treaties, we will present explicit proposals for the necessary Treaty changes ahead of the next European Parliamentary election in 2014, including elements for reinforced democracy and accountability,” he said.But, “no one will be forced to come along. And no one will be forced to stay out. The speed will not be dictated by the slowest or the most reluctant.”

Barroso puts it clear: “Globalization demands more European unity. More unity demands more integration. But more integration also demands more democracy. And there was much talk about this as well.  He wished for the development of a European public space, where European issues are discussed and debated from a European standpoint. “We cannot continue trying to solve European problems just with national solution,” he said. He made an appeal to European thinkers and “men and women of culture” to join this debate, and called at the same time for European political parties to europeanize European elections (parties can nominate their candidates for the Presidency of the future European Commission for example).“Because even in the European elections [..] we see a national debate between national political parties. This is why we need a reinforced statute for European political parties”. At the same time he made reference to the urgent need to strengthen the role of the European Parliament. As European federalists, we can only encourage such engagements.

Why can’t you understand the modern world?!

Following the speech MEPs were given the opportunity to take the floor and have their say. This year’s State of the Union prompted a lively reaction in the European Parliament.

After criticizing the incapacity of the national elites to make the jump to a real federal union, Liberal leader Guy Verhofstadt did not give his full support to Barroso’s concept of “a federation of nation states” and believes in a European institutional approach which goes further and can transcend the current limitations of the EU model. -“No, no, no! No federation of nation states. That’s more of the same. That’s more of what we have already. That’s the European Council…who are incapable of solving this crisis.

Andrew Duff, a British Liberal MEP leading the Union of European Federalists, said that Barosso’s speech signaled “a major constitutional shift, involving all EU institutions”. However, he slightly nuanced his group leader, saying that “we should work towards federalism generally and shouldn’t  get bogged down in “semantics”

A fiery  and entertaining exchange  took place between UKIP MEP the Earl of Dartmouth and Green MEP Cohn-Bendit.  When Cohn-Bendit was asked a question by William Legge,  Earl of Dartmouth, an MEP with the United Kingdom Independence Party (UKIP) why he couldn’t  understand that federalism, European regulations and the wasteful, wasted European budgets are the cause of the European disease, Cohn-Bendit replied:

“Why can’t you understand that in 30 years none of the European member-states, neither the UK nor Germany, will be part of the G8. Can’t you, Mr Earl, understand the modern world?”

One of the more entertaining highlights in the State of the Union which clearly pointed out the relevance of federalism in Europe and the need for a broad-minded perspective on Europe’s future. Also Cohn-Bendit encouraged the Commission’s president that he dared to use the F-word in his speech.

“Europe I believe, has a soul.”

In general, we saw three different opinions on this matter. Those following President Barroso’s lead and calling for “step by step” progress towards a “Federation of Nation-States”. Followed by those who argue that this doesn’t go far enough and we need a “Post-National Federation”; and, eventually those who believe we need to abandon the euro and return to a Europe of Nations. Everyone however seems to agree that defending the status quo is unsustainable. As young federalists we also agree that “Federalism is the only realistic and achievable goal. It is the current path that is rather unrealistic”.

And surely, this plea for more federalism gives hope, but we must not forget that ambitions without results are simply good intentions There are indeed a lot of questions left open in this State of the Union. For example to what extent Barroso plans to fill in his concept of a “Federation of nation states” and to what extent it will also involve a shift of democratic elements to the European level? And what’s Barosso’s view on a two-speed Europe?

Before new European history can be written, we need to put noses in the same direction. Barroso calls for “pro-European forces” to put aside their differences and avoid “wasting too much energy” on attacking each other. We must use the 2014 election to mobilise all pro-Europeans”. It is only together that we can maximize our potential, and achieve a better, fairer, stable and more prosperous continent.

As Young European federalists we call for a new constituent Convention with representatives from the civil society coming together with national and European parliaments, the governments and the European Commission, with a mandate to overcome national vetoes, intergovernmentalism, to develop a real federal constitution. But first things first: Let the debate about real federalism begin.

“The realistic way forward is the way that makes us stronger and more united. Realism is to put our ambition at the level of our challenges. We can do it! Let’s send our young people a message of hope.[…] Now is the moment for all pro-Europeans to leave business as usual behind and to embrace the business of the future. The European Union was built to guarantee peace. Today, this means making our Union fit to meet the challenges of globalization. That is why we need a new thinking for Europe, a decisive deal for Europe. That is why we need to guide ourselves by the values that are at the heart of the European Union. Europe I believe has a soul. This soul can give us the strength and the determination to do what we must do.” (Barosso, State of the Union 2012)