Home » One wall, one fall, one Europe … and three voices 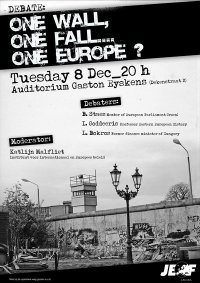 To draw attention to the 20th anniversary of the fall of the Berlin Wall, JEF Leuven has not only organized a street action in which people were invited to tear down a symbolic wall, but also a debate on the ideological wall. This discussion took place on the 8th of December. Although the event didn’t draw a huge audience, the topics raised by the speakers covered a wide range of interesting contemporary issues.

Originally, the debate was to have three speakers. Firstly, Professor Idesbald Godderis was invited, who is a.o. specialized in the cultural history of Central and Eastern Europe and the Cold War. EP member Lajos Bokros, former Hungarian minister of finances, ex-CEO of the Budapest Bank and professor at the Central European University was expected. Bart Staes, Member of the European Parliament for Groen! and delegate of the European Green party, was also to take part of the debate, but he sadly could not make it the night itself. The debate was moderated by Professor Katlijn Malfliet, Academic at the Institute of International and European policy.

I will mainly touch upon the two most interesting topics, namely the mental wall between East and West and the expectations of the new members of the EU.

Europeanization and democratization: the mental wall

The debate started with the question whether a mental wall still exists between Eastern and Western Europe, and how the European rule is experienced. Professor Godderis stated that seemingly, democracy doesn’t work accordingly in the East, but the situation is not so much better in the West: threats to democracy still exist. Europeanization is only a perception: even though Leuven is only twenty kilometres from Brussels and the European rule, it is experienced as “far”. However, it has been twenty years since the fall of the wall, and the difference between East and West is not such a huge abyss anymore for the new generation.

Professor Bokros emphasized the transition the East has been through, namely the switch to free market and democratization. But is the European rule positive or negative? In the Eu there is little potential for growth: the USA and China are threatening it.

Are the former communist countries’ expectations from the EU realistic? Professor Bokros disagreed. Whereas during the communist regime, those respective countries were promised much, there was dictatorship to blame for the things that went wrong. In a democracy, it is more difficult to point fingers. Professor Godderis brought in against this statement that while the East’s expectations are too high, the West’s should be lower. According to him, Western society should take some steps back from the high living standards it has now. The issue of mentality and expectations becomes reversed.

Another important issue that was raised was Pan-European security.  Professors Godderis and Bokros agreed that there is need for a clear European policy in that regard. The problem is how to achieve this without upsetting Russia.

After the debate there was a question round. The audience raised a variety of interesting though sometimes unrelated issues, from Gorbashev to the Hungarian minority in Western Romania.

Professor Malfliet’s introductions and input were very helpful for inducing reflection, and as a general given the topics discussed were actual and highly interesting. The points of view of the two speakers showed usually conflicting, but valuable perspectives on the European Union as it has grown since the fall of the Berlin Wall.

Personally, I found it an extremely interesting experience to witness direct interaction between East and West, not only between the speakers but also the audience, which was mainly made up of foreign students.  Having been born in Romania but grown up in Belgium, I am myself a product of the unification of Europe and found it therefore nice to have the converging and the diverging points of view together in one room. In my experience, the differences between Eastern and Western Europe have decreased in later years, not only ideologically and culturally but also externally in the scenery of cities.

However, this statement asks for a next blog entry!

You can find the full recording of the debate at: