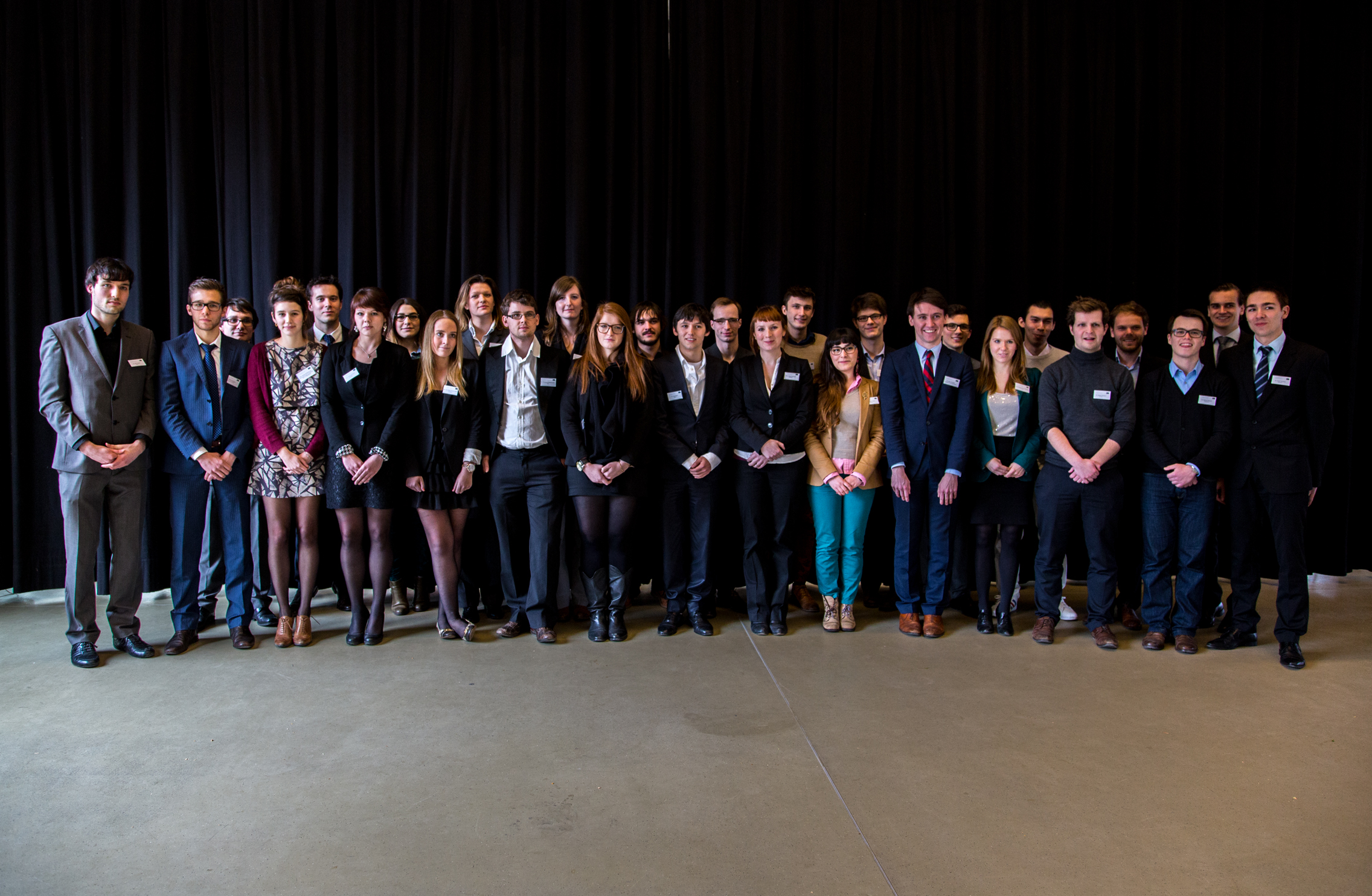 When the current board of JEF Ghent got elected, one of the main goals was to organise a simulation of the

European Council. Months of preparation finally accummulated in two days. One day of simulating the European Council, preceded by an evening reception on March 15th.

After a short introduction on JEF Ghent by our president Laura Corbett, the “getting-to-know-each-other” reception on Friday evening was opened with a speech by the European Commissioner for Trade, Karel De Gucht. The Commissioner spoke about his previous experiences within the Council and how a consensus was formed at the negotiation table. Pieter Verhelst, advisor on International and European policy for the Farmers League, gave a lecture on the current situation of the common agricultural policy. Since the CAP isn’t a subject that is widely known, the presentation was a welcomed crash course on the subject. The reception was also the first moment our participants could start to connect with like-minded heads of government in an informal manner.

Saturday, early in the morning, the real simulation started. This is what transpired…

Ghent, March 16th – This morning the summit of the European Council gathered in Ghent. After the arrival and the informal reception yesterday, the heads of state and government had a full agenda of difficult topics to get through. The Multiannual Financial Framework (MFF), Common Agricultural Policy (CAP) and European Security Strategy (ESS) were the obstacles to conquer for the participants.

The European summit, without a bed-ridden Latvian and an ill Belgian prime-minister, immediately started with the MFF dossier. The main goal of the Council was to counter the criticism stated by the Parliament  – for the Simulation, we created our own Parliamentary reaction (ed.). According to some inside sources, the negotiations didn’t start of on a constructive basis and even previously agreed issues were brought back to the negotiation table, which led to a stand-off between two clearly divided groups. President Janssen of the European Commission was overheard saying, and I quote, “the Council would do well to focus on the issues at hand, instead of creating new ones”. A round of bilateral and informal contacts brought the two groups back together.

Up until this point, it was still very unclear where, even if, the European Council would be able to meet some of the terms put forward by the Parliament. Some countries, Finland among them, did say that there were still savings to be made on the budget for the functioning of the Commission, and that one less Commissioner would save a lot of money. Although the southern member states were happy to put Oli Rehn forward as the one to be sacked, the idea was eventually let go.

Before lunch, a consensus was still a long way off. The President of the Council, De Waele, adjourned the meeting, but not before stating that the lunch time should be used wisely and “to reflect on the issues at hand, and reconvene with a more constructive state of mind”. The words of the De Waele did have the desired effect.

Meeting in the middle
The Parliament’s questions concerning the MFF were to be taken seriously, and that’s why the Council re-emphasised its commitment towards creating growth and jobs. The initial proposal of the presiding member state, Ireland, to lower the budget for the CAP and infuse it directly into the Cohesion Fund was met with French resistance. However, on suggestion of the Commission, a package deal was made.

The first part of the deal was based in drawing up a new policy framework for the CAP. The main issue here, was that an agreement was found in order to diminish the market corrections in different phases. The second part of the deal was the reallocation of the policy objective of territorial cohesion from the Cohesion Fund to the CAP. Within the CAP, this would be funded with means made available through reducing market corrections, thus freeing up extra finances in the Cohesion Fund. These new resources ought to be directly reallocated to tackle the staggering (youth) unemployment rates the Union is currently dealing with.

Nothing new for security
It seems that our leaders are still somewhat reluctant to share their military capabilities in order to strengthen the European Union’s security. There was absolutely no room for any consensus stretching beyond a declaration of intent on the issues of pooling military equipment, continued support for the EEAS and supporting peace-keeping operations. The subject of Syria was quickly disposed of and passed on to the Foreign Affairs Council.

Facing Challenges
Even though all the heads of state and government seemed happy with the outcome of the simulation, it is very clear that the current state of the European Union is still worrisome at best. Many more challenges lay ahead in order to gain back the citizen’s trust.

On a personal note: I want to thank all the participants for their contributions during the simulation. They made the day exciting and fun. But the final thanks have to go the JEF Ghent team. We all put a lot of time, effort and energy into this. It was fantastic to see it all go as we hoped. It was great to work with you (organisers and participants) all!!

Notes:
The official conclusions of the simulation can be found here (Dutch only unfortunately).
Check out our photo album!