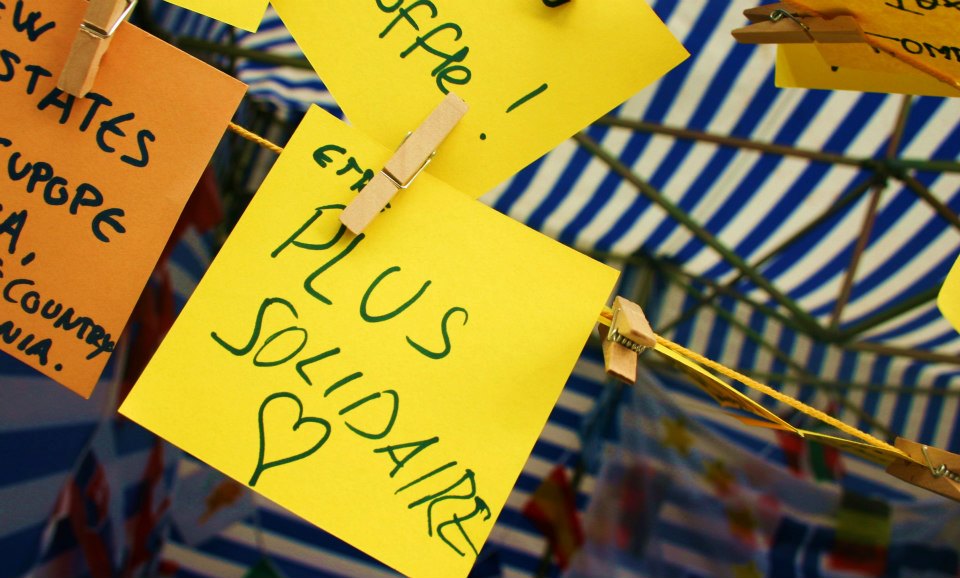 (This is an extended version of the speech that was delivered by the Young European Federalists debate team at the YO!fest 2013 Debate Contest in Brussels. After three rounds of debate, the audience and the independent jury decided that we won the contest)

We are glad to join you here to discuss the vices and virtues of austerity and solidarity as tools to fight the crisis. Very glad to be here indeed, but at the same time, I’m asking myself: Should we really be here to debate this? Maybe none of us should. We can all see every day that the current austerity policy doesn’t work! Allow me to start off by explaining why it is as clear as day that austerity is not getting anyone out of any crisis.

1. I’ll start with some numbers.

2. These numbers show us clearly that austerity is not increasing our welfare. And that is no wonder: because a few weeks ago, the research that was often used to support the claim that high debt reduces economic growth was proven to be scientific nonsense. (For example, Oli Rehn, European Commissioner for Economic and Monetary affairs, claimed until recently that “it is widely acknowledged, based on serious research, that when public debt levels rise about 90% they tend to have a negative economic dynamism, which translates into low growth for many years“. This “serious research” now turned out to be based on bad methodology and miscalculations.)

3. But citizens don’t take to the streets protesting because of scientific discussions. They protest because they feel the toll of these failed policies in their daily lives. When my Italian friend Monica tells me that half of her friends have left Italy to come to Brussels in the hopes of finding a job here, or when I read the third opinion piece of this week that claims that me and Mathias and Vaida all belong to a lost generation… That’s when I get angry. Many proponents of austerity seem to forget that austerity doesn’t hit states. Austerity hits people. And that begs the question whether it is the fault of current youth that they were born at this moment? By stressing austerity in a time when young people are screaming for help, we are not just “saving money”. We are cutting down the generation that should be leading the European Union in twenty years from now. The burden carried by youth today will become a burden carried by our entire society in the future.

Europeans should not be led by their nations to impoverish each other. If we want to avoid the degeneration of European society, then austerity needs to be relaxed and solidarity becomes our obligation.

4. I’ll tell you what we mean by solidarity exactly. During the French revolution, people called for “Fraternité”. Well, through that battle cry, solidarity acquired its political meaning of short-term sacrifices of individuals in favour for the long-term benefit of a nation. But our argument is that fraternité goes beyond the confines of nations. Fraternité is not about binding people with a common national identity, but about uniting forces today in the face of common challenges in the future. And which state wins or loses is of little importance, as long as the EU wins as a whole.

5. So what do we need to do to establish this kind of solidarity? I will restrict myself to just the two most important points

6. So we are taking a stand here to choose the path of European solidarity. Since the second World War, solidarity has defined our welfare states from other nation states. Now it is  time to let it define Europe as a whole.That path won’t be easy. But we knew that when we took our very first steps toward the European Union. We might not be able to borrow our way out of the crisis, but let me repeat our call for European solidarity by borrowing the words of Altiero Spinelli, the man after which this European Parliament building is named:

(“The road to follow is neither easy nor safe. But it must be pursued and it will be.”)