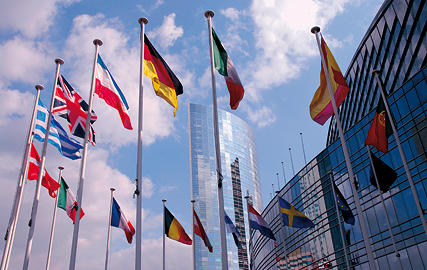 Model European Union (MEU) Madrid is a simulation of how the three main bodies of the European Union (the European Commission, the European Parliament and the Council of the European Union) function. Young people from all over Europe are welcomed to come and represent the role of a Euro MP, a minister, a journalist or a lobbyist during four days around the debate, negotiation and voting of amendments to a European law. The MEU will will take place in “Carlos III” university in March 2014, entirely in English.

-Promote an active young citizenship: To call attention on the importance on their daily life of the decisions taken in the European institutions.  The first step for a citizen who gets involved in politics is a citizen aware of how politics works. Europeans need to understand how the EU works.

-Provide academic knowledge: The best way of understanding how the European laws are made and how its different institutions interact with each other… is to live it from inside! Besides, MEU is the perfect environment for practicing and improving your formal English skills, both spoken and written.

-Provide non-academic knowledge: To rouse skills and attitudes in the participants such as: teamwork in a multinational environment, public speech and debate, constructive negotiation in an institutional context and the ability of understand the reasons of the ones that have a different opinion than you.

-Create a meeting space for young Europeans that care about the World around them.

MEU-Madrid 2014 is being organised by AECPOL, a non-profit students association of the “Universidad Carlos III” (Madrid); helped by JEF-Madrid, one of the local sections of JEF Spain.

You need to be between 18 and 35 years old for taking part in MEU-Madrid. Priority will be given to those currently studying in any European university (undergraduate, graduate, master degree or phd) during the 2013/2014 academic year. It is not mandatory to be a European citizen.