Once Upon A Time…

Starting January 1st, 2014 the UK fully liberalized the working restrictions for Bulgarians and Romanians. Bulgaria and Romania joined the European Union in 2007. Since then, they have been able to work in the UK under certain circumstances: employees had to apply for a “registration certificate”, but these restrictions have been lifted.

Approximately 10, 000 arrivals are predicted and government is expecting big pressure on public services, health system and housing. As a consequence of growing concerns about a possible influx of Romanians and Bulgarians, PM David Cameron announced new restrictions that would limit Bulgarians and Romanians, and possibly discourage any others to come to the UK in a first place. 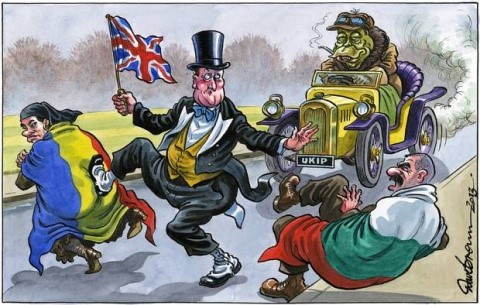 A cartoon, published in the Independent, pictures British Prime Minister, David Cameron, kicking out of his way emigrants, wrapped in Bulgarian and Romanian national colours, to make way to a troll-like creature with the inscription UKIP (Independence Party – See more at:http://www.novinite.com/view_news.php?id=156786#sthash.AYUBq9CG.dpuf

Measures are already planned to restrict migrants’ access to benefits, health care and housing. Restrictions involve a rule that anyone from the European Union coming to the UK with an intension to work will have to wait 3 months before claiming benefits. Other restraints are cutting off benefits after 6 months with no jobs prospects and imposing a 12-month re-entry ban for people who have been removed.  Additionally, immigrants will be kept out of council house waiting lists for at least 2 years. Habitual residence test were modified, using more challenging questions with a particular focus on migrants’ English language skills. Bulgaria’s Foreign Minister K. Vigenin described the policy as “unfortunate” and linked it to nationalistic and Eurosceptic feelings that are on a rise in the UK. New law also deals with possible illegal exploitation, stating that employers paying less than the minimum wage to their workers will face a £20,000 fine per underpaid worker.

Which side to take?

At the last meeting of 2013 between the leaders of the EU Member states – Brussels Summit, David Cameron explained that the right to work anywhere in the EU was being abused by many immigrants who take advantage of country’s welfare system.  His concern is that migrants will exploit public services and the benefits system. For these reasons, Cameron believes restrictions are inevitable to sustain a just society that works by its rules.  Many Britons fed by political debates and over-reactive headlines support Cameron, especially those seeking for jobs and living in poverty as they see migrants as a threat. According to Daily Mail survey, a total of 82% of respondents said “no” to a new influx from Bulgaria and Romania. On the other hand, independent immigration think-tank British Future showed that 77% of respondents would welcome migrants who work hard and pay taxes, learn the language and become part of the community. After all, the only effect this debate is causing is a negative attitude towards Bulgarians and Romanians which can directly reflect on their job opportunities in the future. People’s perception is negative even before they come and the currently hostile situation does not help those who have already integrated in society and live in the UK.

The Other Side of the Coin…

Not everyone within the UK parliament sees migrants as “the unwanted ones”. The Conservative MP John Baron stated that in his opinion “immigrants work hard and it is higher pay rather than benefits that are attracting them.” Many others agree and state that the UK should be grateful that well qualified Romanians and Bulgarians desire to come and contribute greatly to the British economy. Statistically, Romanians and Bulgarians are expected to fill vacancies in the agriculture and hospitality sectors which Britons themselves usually refuse to work in. BBC cited that immigrants from EEA countries (The EU + Norway, Iceland, Lichtenstein) put considerably more in taxes than they receive in benefits and transfers. Thus, before creating a panic and taking possibly unnecessary measures, we should wait for the consequences of opening the British labour market further. “There is no relevant statistical data showing the number of migrants coming to the UK,” added Vigenin.

Being a JEF-er and Pro-European, I find very concerning the fact that Bulgarians and Romanians are always labelled as ‘immigrants’. They are Europeans. They are European citizens with skills and motivation, and equal rights to seek jobs and life abroad. We should strive for a stronger European Union that is capable of tackling the cross-border challenges of our multicultural societies. We should work for a just and integrated society… a DEMOCRATIC society. This goal cannot be achieved if we go on pointing at specific groups. Therefore, it is up to us how we are going to respond to ongoing political debates. It is in our hands to shape and build our Europe-whether united, democratic and respectful or full of prejudices and hostility.