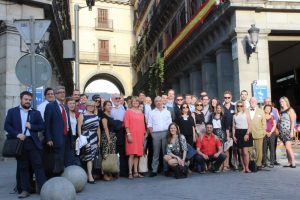 I think it is safe to say that Madrid  welcomed us warmly, perhaps a little bit too warmly, 38°C to be exact, but it takes more than that to discourage a motivated Federalist. Many UEF and JEF members were present in this beautiful capital of Spain, and as JEF Belgium we didn’t want to miss it either!
We would like to express our special thanks to our JEF and UEF Spain hosts who took the time to show us around the city, bring us to the nicest bars and restaurants and share many historical and cultural aspects of what makes Spain such a great country.On Friday 16th June, the Union of European Federalists (UEF) held, together with The Spinelli Group and Elcano Royal Institute, the debate on ‘Europe at a crossroad: Time to complete the European political unity’. The panel was composed of prestigious guests, among which were several MEPs, professors and other pro-European figures. With more than 200 people attending, the event was a great success.
The UEF Federal Committee meeting took place on the following days, from 17th to 18th of June, in the Instituto Universitario de Estudios Europeos – CEU San Pablo University. The photos of the meeting are available here.What was then the outcome of the Federal Committee? Several political resolutions were adopted in the meeting. You can find out more about the political guidelines driving the federalist agenda by having a closer look at the latest resolutions: