Every year at the end of the summer, federalists gather on the Italian island of Ventotene to discuss federalism to the bone. Last week, the 29th edition of the Ventotene seminar was organized by the Spinelli Institute under the title:  “Federalism: from Europe to the World”.

The entire week was devoted to a grounded discussion of European federalism on the very soil where it was born. You will find our reports and impressions of the topics we discussed in “the Ventotene Files”,  a series of articles we  will be publishing here in the next week. This is the first of these articles, adressing the importance of Ventotene and sketching a bit of the history of European federalist thought.

The history of Ventotene

Ventotene, known in Roman times as Pandateria, is one of the Pontine Islands in the Tyrrhenian Sea. With a population of 708 people, a length of 3 kilometres and a maximum width of about 800 metres, it is situated about 46 km off the coast of Formia, a city located between Rome and Napels.

The history of the island is not really a cheery one. In the Roman era, Ventotene used to be an island of exile where several noblewomen were exiled to die of starvation. Later, a prison camp was created and restructured under Benito Mussolini on the island of Santo Stefano, where up to 700 opponents to the fascist regime were incarcerated between 1939 and 1943. One of them was anti-facist resistance member Altiero Spinelli.

Spinelli and the origins of European federalism

On the island, Spinelli met Ernesto Rossi and Eugenio Colorni. Rossi, who was a professor of economics, was given special permission to communicate to the outside world on matters of economics. This way, Rossi managed to smuggle in some works of Hamilton, Jay, Madison, and other  American federalists. These texts inspired the political framework that Spinelli saw as the way in which to rebuild society after the war. Together with Rossi and Colorni, Spinelli drafted the Ventotene Manifesto in 1941, in which he pinpoints the fundamental contradiction of political action: despite the increasingly unitary character of historical events, the entire political process is still almost exclusively aimed at single nations. In Spinelli’s vision,  this characteristic led to the atrocities of the war, and should therefore be changed in the future.

The Ventotene Manifesto and the establishment of the MFE

The manifesto clearly analyses the situation in 1941 and sets out the way forward into the future.  The first chapter

deals with the crisis of modern society, in which Spinelli asserts that while the ideology of national independence was crucial for societal progress on the one hand, it has also created the idea of living space (lebensraum) that is seen as the greatest good, fostering devastating wars and conflicts. From this, he concludes that in a world that is characterised by  economic interdependence, the living space required by any people which wants to maintain a living standard consistent with modern civilisation can only be the entire world.

Therefore, the second chapter of the manifesto is oriented toward the task of  rebuilding society in the postwar period. Spinelli warns that the old privileged classes will attempt to rebuild the nation-states in order to regain the balances of power and their favourable positions by targeting pattriotic popular feelings. He argues that this will only lead again to the same problems that led the world  to devestating war in the first place.  Therefore, he argues, the dividing line between progressive and reactionary parties are no longer the old divisions between more or less democracy, liberalism, or socialism. The new division falls along the line of those who want to return to the nation state as the centre of political life, and those whose main purpose is the creation of a solid international State. 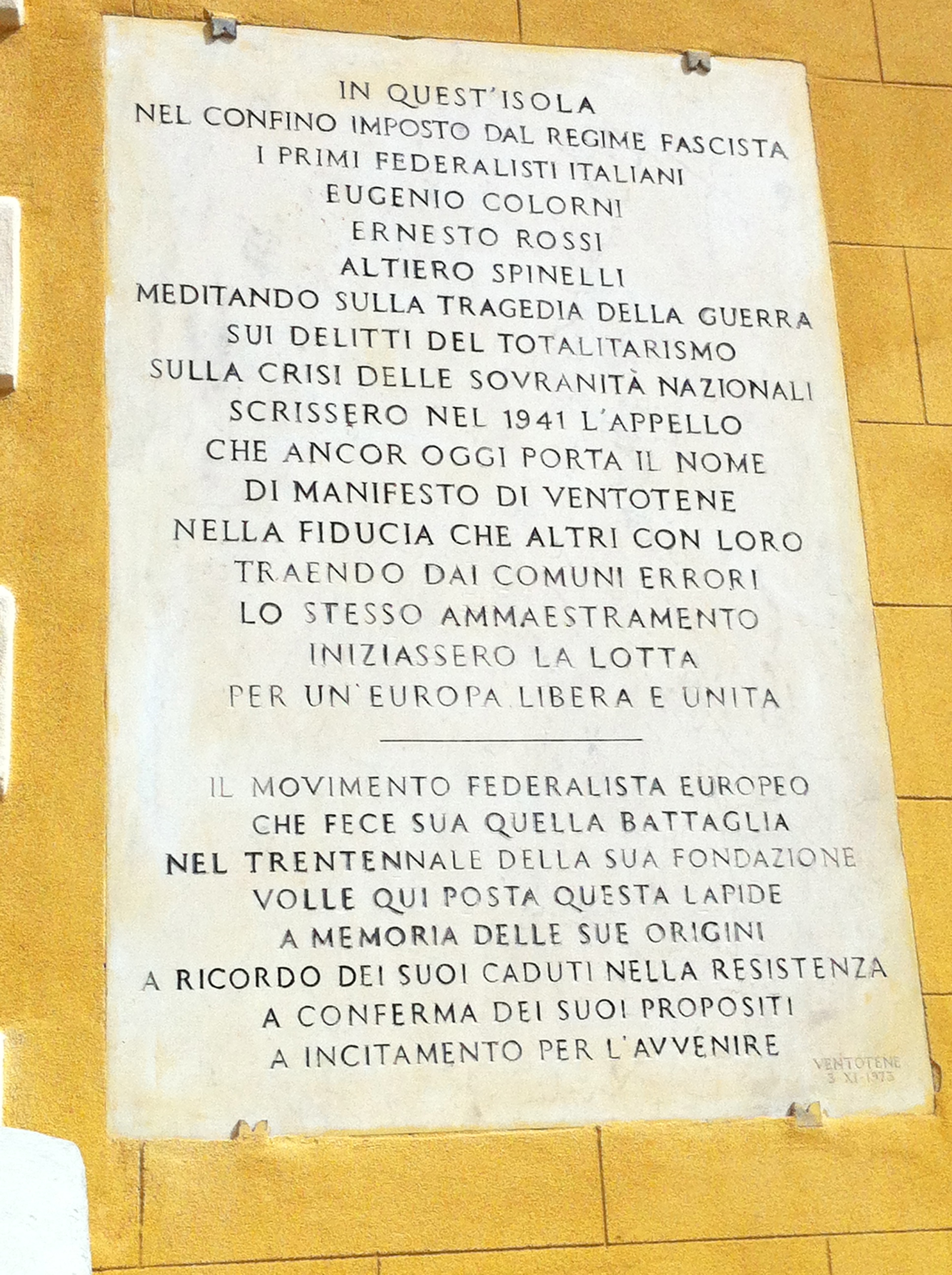 In his manifesto, Spinelli calls for a Movement that builds the foundations for the “birth of the new body which will be the grandest creation that has occurred in Europe for centuries.” The manifesto was smuggled to the mainland by Colorni’s wife, Ursula Hirshman Colorni, were it was disemminated among the anti-fascist resistance.

After his liberation from Ventotene, Spinelli established the Movimento Federalista Europeo in Milan in 1943 with the goal of supporting all progressive forces that worked toward the creation of a real supranational European system, and opposing the reactionary forces that wished to return to the absolute sovereignty of the nation-states. Today, the MFE still exists in Italy and has spread throughout Europe under the flags of UEF and JEF.

After establishing the MFE Spinelli campaigned tirelessly against the dominance of intergovernmentalism and pressured for further steps ahead, amongst others in the (failed) construction of a European Defence Community

Although Spinelli passed away in 1986, the name of this early federalist is today inherently intertwined with the European Union. There is no greater proof of this fact than the nature of the institutions that bear his name. First, the beautiful European parliament building in Brussels, the centre of European democracy, is named after him

. Second, the so-called Spinelli group is a group of political leaders and intellectuals such as Jacques Delors, Mario Monti, Guy Verhofstadt, Ulrich Beck and Amartya Sen, who all vehemently campaign for a federal and post-national Europe. Third, the Spinelli Institute for Federalist Studies in Verona is dedicated to the training and formation of federalists and offers interesting publications on the topic of federalism.

This way, the unequivocal acknowledgement of Spinelli’s role in the EU’s history lives on in the very institutions drive its federal future, as Altiero Spinelli once so convincingly did.

If you want to support Spinelli’s vision actively, become part of the movement by joining us!  You can also sign the Spinelli group manifesto.
If you would like to learn more, you can find the Ventotene manifesto in different languages right here!